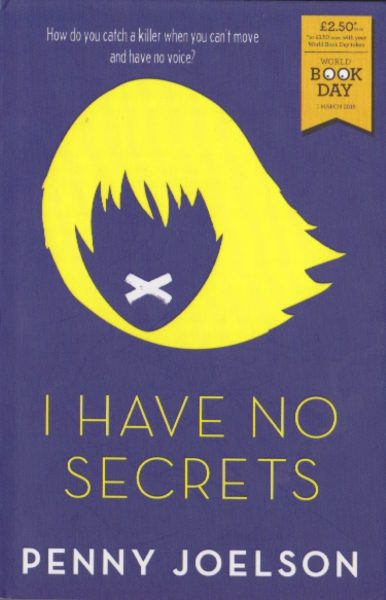 I Have No Secrets by Penny Joelson is a murder mystery, but at its heart is the story of a girl trapped inside her own mind, begging to be let out. Jemma is a normal fourteen-year-old girl, except for the fact that she cannot move or speak. She is quadriplegic and is confined to a wheelchair, and because of her cerebral palsy she is unable to communicate. Her carer, Sarah, and her foster parents do their best to look after her, but they cannot ask her what she wants or leave her alone for very long. At the same time, they must also take care of their two other foster children, Olivia and Finn.

Jemma’s otherwise quiet life is interrupted by the news that she has a twin sister named Jodi who she never knew about, but unlike Jemma she has no disabilities. Jemma desperately wants to meet Jodi, but her parents don’t want to introduce them if Jemma has no way of communicating yet. On top of that, Sarah’s boyfriend, Dan, secretly bullies Jemma when she is alone, knowing there is no way she can tell anyone. One day, after a young boy in their neighborhood is brutally murdered, Dan tells Jemma that he is the one who did it, but what can she do?

This novel is gripping from beginning to end, taking unpredictable twists and turns and setting the reader on a roller coaster ride of emotions. The book is written in first      person, from Jemma’s perspective, and it   effectively puts you in her shoes and makes you better understand and empathize with what she is going through on a daily basis. If you are looking to read a story from a  different kind of perspective or are interested in learning about the lives of people with disabilities, then this book is for you. In addition, the novel is also a chilling murder  mystery that ends in the most unpredictable way.

I would recommend I Have No Secrets to eighth grade students as the main character is the same age as them. In addition, themes like loss and love are common throughout the story and would not be appropriate for most younger readers. If you are interested, I hope you will consider giving this unique novel a chance; you will definitely not regret it.