Although it may be hard to get other native speaking teachers in another language, ASL should still offer a few more language options. London is a city filled with many cultures, traditions, and languages. At ASL, middle school students only have the opportunity to learn Spanish, Chinese, or French. But some students and teachers believe that students in middle school should have more than three languages to choose from.

Students should be offered more languages because they should have more opportunities to learn about different languages and cultures. Three languages is not a lot considering how many students there are in the middle school. As a new student coming into ASL, I think students need more choices of languages. I am now currently taking Spanish, which is very useful when I travel to Spanish speaking countries, but I would have liked to take a language that is not as common as Spanish, such as Arabic or German. 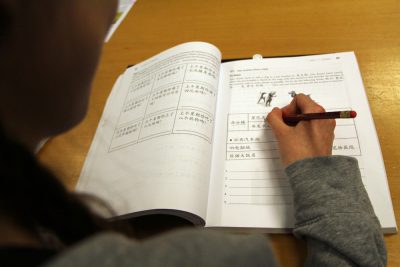 For example, Ms. Patricia Elsea, a middle school ELA teacher, said, “we have students at ASL who speak 52 different languages, which is absolutely amazing. It would be great to create more opportunities for those voices to be celebrated and learned about more.” Ms. Elsea also had a few additional comments. “I’m not really sure why there are only three languages, other than budgetary restrictions of hiring teachers.”

Another example of a teacher who thinks it is right to add more choices of languages in the middle school is Mr. Carlos Alvarez Santos. “If I had to vote for one to include in our program, I would suggest Arabic, which we teach in the High School, and it is as widely spoken as the ones we already teach in the Middle School.”

I took a poll of eleven fifth graders about what languages they wanted to add. Four of them said they wanted to add Italian, one said Arabic, one said Portuguese, one said Japanese, and four said German. After doing the poll I realized how many languages people speak, and how little recognition some of them get.

Although there are a few things I want to change or add to the world language program at ASL, I still believe that the way teachers teach the subject is great. I feel the need to learn more about world language and culture. These are very important elements in order for a student to have a good education. I would love to see more opportunities for students to learn more than French, Spanish and Mandarin and for other languages to have a voice as well.