For the remaining months of school, we, the Scroll editors, decided to choose a different genre for each monthly Spotify playlist we create. This month’s theme is international songs, or songs in a different language. Each of us chose a song and explained why we like it or it’s importance to us. Go to scrol.asl.org to listen to what we chose.

Alex: Hips Don’t lie by Shakira. Although this was a popular song in English a few years ago, sometimes it is played in Spanish and is still very good.

Briannah: Bailando by Enrique Iglesias. I chose this because it is very upbeat and catchy. 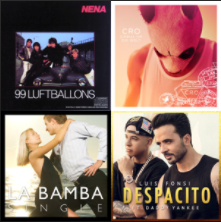 Cameron: Papa Allo by Alonzo. This song is talking about the relationship between the artist and his father and it is in French but the lyrics flow very well and talk

about an important issue for the artist

Camilla: Suavemente by Elvis Crespo. We listen to this song a lot in Spanish; it’s fun and upbeat.

Carrie: MIC Drop by BTS. This is a popular k-pop song by a boy group called BTS. The album peaked at 7th place on the Billboard 200 chart.

Finn: Mi Gente by J Balvin Willy William. I really like this song because I can understand some of the Spanish words. It also has a nice beat.

Gigi: La Bicicleta by Shakira. This song is really good. We listen to it a lot in my Spanish class because it is in Spanish.

Hudson: Mercy by Badshah. Badshah is an incredible Indian rapper and his song Mercy goes hard.

Isabel: Dos gardenias by Buena Vista Social Club. I chose this song because it connects to Spanish culture and my family and I enjoy listening to it together.

Joaquin: Mi Gente by J Balvin Willy William. I chose this song because it has a good flow.

Leyth: Ya Halai Ya Maliby Mohammad Assaf. I chose this song because it is a song from a Palestinian, and I am from Palestine. There is also a movie about the artist which my parents helped produce.

Olivia: Macarena by Los del Rio. A lot of people know this song, but they only know the chorus and I think the bridge and the rest has a really cool beat. Also, it’s a good song to dance to.

Rudi: Katchi (Ofenbarch vs Nick Waterhouse) by Ofenbarch and Nice Waterhouse. This is a popular song in France and it is great to listen to.

Sofia: Despacito by Daddy Yankee. This song is fun to listen to and my friends and I play it a lot.

Spencer: La Bamba by Ritchie Valens. This is a fun Spanish song to listen to.

Stella: Einmal un die Welt by Cro. This is one of the only German songs on this list, but it is fun to sing along with.

Mr. Bridgewater: 99 Luftballons by Nena. This was popular when I was an 8th grader, but it was usually the English version that was played on the radio. However, every once in a while they played the original German version.