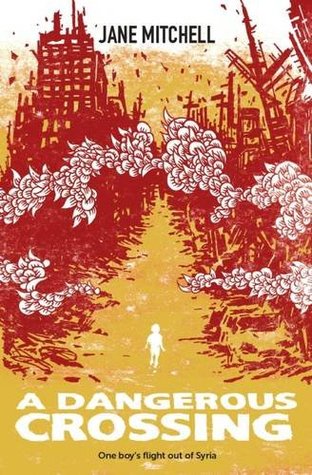 A Dangerous Crossing by Jane Mitchell follows the story of a Syrian boy named Ghalib Shenu, who must flee Syria along with his sister Bushra, brother Aylan, and mother and father whom he calls Umi and Baba. Syria becomes too dangerous for them, and Ghalib and his cousin, Hamza, try to find items to sell on the streets. They are almost killed by a barrel bomb, so their family immediately decides that it is time for them to flee to Greece in order to start a better life.

Lastly, they meet their biggest challenge of all. Ghalib and his family must take a boat to Greece. However, this is not a large or strong boat; the boat is flimsy, weak, and is crowded with refugees. Will they make it to Greece, and will they survive their hardships? If they do reach Greece, how will they have the money and resources to begin a new life?

The book explains in depth how refugees feel and what they experience while crossing borders in order to try to start a new life. Throughout this novel, I learned about the various struggles and challenges Ghalib faced, and I also discovered how harshly other countries can treat Syrian refugees, which is disappointing. There is also a glossary at the end of the book that tells the reader about the key Arabic words mentioned in the story. Lastly, the back of the book contains a description of many of the children who died in Syria, and these children’s names were used in the book for the characters’ names.

Throughout this book, there were many highlights, especially the suspense there was when Ghalib and his family try to hang on to hope and survive on the boat. This book can be compared to many books that describe the fleeing of Syrian refugees into other countries due to the ongoing civil war in Syria. The interest level of this book was high for me, and although Ghalib was the only character telling the story, he also explained how his family and other refugees felt about the circumstances they were in and the struggles they were facing. It is very hard for me to relate to this book, as I am fortunate enough not to have experienced the hardships that refugees face today. I would recommend this book to fifth graders and above, as the topic of refugees fleeing Syria and the devastating conditions they experience is quite mature and emotional. Overall, I thought that this book was full of adventure and interesting events, but it did touch upon many tragic and depressing topics surrounding the current Syrian refugee crisis, such as violence, desperation, as well as war.