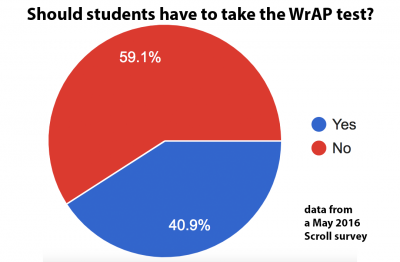 For at least the past 10 years, students in grades 5-8 have annually participated in this test in the spring. ASL administered this test because the ALT thought it to be a valuable outside source that provided an insight into how ASL students compared to other schools. Additionally, according to Ms. Jennifer Kirstein, the assistant director of teaching and learning, the aim of administering any external assessment at ASL is to create a “wide portfolio of data” for a student, including in-class tests, projects, report cards, as well as test results from an outside source, such as the WrAP test.

“We want to make sure that we are looking at using lots of different sources to understand how our students are learning.” Ms. Kirstein said.

Despite the benefits that the WrAP test once offered, it no longer reflects the academic standards which are implemented at ASL for several reasons.

Over the last four years, ASL has transitioned into the Common Core curriculum. It has become increasingly apparent that the WrAP test no longer aligns with the Common Core standards ASL has adopted. The school has also discovered that the WrAP results were occasionally invalid, as in several occasions, written pieces were sent back to be assessed again and the results were drastically different.

With the discontinuation of the WrAP test at ASL comes many additional benefits. Standardized tests take valuable time off of classroom instruction. Teachers were unable to productively use the data collected from the test because the test was only administered in the spring, and so results were only released in the summer. Thus, the ALT, consisting of the principals, assistant principals, the head of school, the director of technology, and the office of teaching and learning, made the executive decision to discontinue this test at ASL.

Seventh grade English teacher Mrs. Tracy Steege used to use her student’s WrAP scores to look for red flags or for students who required additional support and guidance. Now, in place of the WrAP test, she plans to just use other internal assessments throughout the year to provide her with that same information.

Fifth grade humanities teacher Ms. Nicole Van Gasse noted that the WrAP scores were the “first piece of data we got for students each year.” Instead, she will use other in-class writing assignments.

The office of teaching and learning firmly believes this decision will very much benefit the middle school community. The team is currently working hard to research other possible writing assessments to replace the WrAP; however, they have not yet come to a decision.