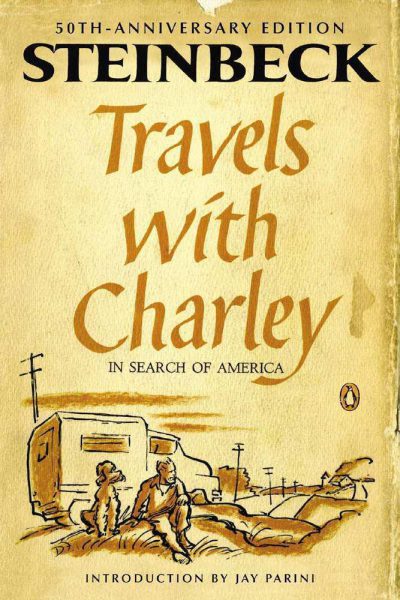 Travels with Charley in Search of America by John Steinbeck follows the author on a 10,000-mile road trip spanning 34 states in the summer of 1960. With his faithful poodle Charley by his side, he sets out to explore the America he believes he’s lost touch with after 25 years away. Steinbeck orders a truck with a small house attached and packs up for the journey. Then he, Charley and Rocinante (the truck) embark on their expedition across the United States.

In his middle age, Steinbeck comments on how his lifelong hunger for adventure has never wavered. He believes there is no cure, but he tries to satisfy the yearning with a trip through the peaceful forests and developing cities of 1960s America. All of this he does alongside his best friend, Charley. Steinbeck’s colleagues warn him that people will be suspicious of his trip with no sure destination or his New York license plate, but the already famous author is neither questioned nor recognized once.

Although John Steinbeck never wrote a formal autobiography, Travels with Charley is the most personal novel he ever published. It is an authentic account of experiences that many of us wish to have one day, beautifully written in its simplicity. It is a true story, but it reads as fiction, taking so many unexpected twists and turns along the way. This makes it the the perfect summertime read, an inspiration for our own adventures away from home.

I would recommend this book to seventh or eighth grade students looking for a classic tale of travel and friendship and escapades into the unknown. It may be too mature for younger readers as it talks about finding oneself and going off into the big, wide world, which may be harder to comprehend for fifth and sixth graders.

As a nonfiction novel, it explores one man’s real journey of adventure, and each detail makes it feel like the reader is there alongside Steinbeck and Charley. First published in 1961, Travels with Charley feels as though it could have been written this year. It has a timeless feeling; it is uplifting and purely enjoyable to read. For anyone with a mind for travel or who wants to take a journey like this of their own one day, it is definitely worth giving a try.