Alex: “Castle on the Hill” by Ed Sheeran. This is a great slow beat song. 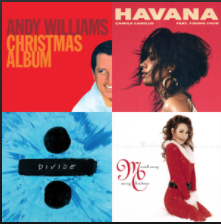 Briannah: “It’s the Most Wonderful Time” of the Year by Andy Williams. It is a great Holiday song and it’s a classic. It’s also a relaxing song.

Cameron: “Havana by Camila Cabello” ft. Young Thug. It is a very popular song right now. It has been the #1 song for a long time.

Camilla: “The Christmas Song” by Justin Beiber and Usher. Modern and very festive song, lots of people like Justin Bieber.

Carrie: “All I want for Christmas is You” by Mariah Carey. It is a popular Christmas song that lots of people listen to. The other version of this song has Justin Beiber in it, ad we already have a song with Justin Bieber.

Finn: “Have Your Self a Merry Little Christmas” by Sam Smith. It’s a song that is calming and is slow, which can be a good contrast to a lot of the other Christmas songs.

Gigi:” Up On a Housetop” by Pentatonix. This is an awesome Christmas song and I like how the band took it and rearranged it to be different from all other versions. it is also very upbeat so that’s cool.

Hudson: “Redbone” by Childish Gambino. It’s a very relaxed and deep song which will leave you awakened.

Isabel: “Santa Clause is Coming to Town” by Frank Sinatra. This song is perfect for the holidays and whenever anyone thinks of Christmas they think of this song.

Leyth: “You Name It!” by DJ Seude The Remix God. It is a fun way to learn about different Thanksgiving foods that people eat.

Olivia: “Last Christmas” by Wham! Carrie took ‘all I want for Christmas is you’ and this is the second most iconic Christmas song.

Rudi: “Home” by Edward Shape and the Magnetic Zeros.  It’s a great song and it is really catchy.

Sofia: “Hallelujah” by Pentatonix. I chose it because I like how they took a song and rewrote it so that it is acapella.

Spencer: “ZO2” by Zo. I chose it because it is written by a famous basketball player (Lonzo Ball) and a lot of people like to hear people they know sing.

Stella: “Wonderful Christmas Time” by Paul McCartney. It’s a well known Christmas song which my family and I listen to every year.

Mr. Bridgewater: “(There’s No Place Like) Home for the Holidays”. This song was on an old 8 track tape that my siblings and I listened to when I was in middle school when we went skiing during the winter break to Loon Mountain in New Hampshire.

View all posts by Scroll Editors →