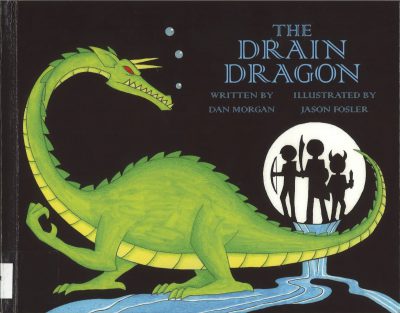 Mr. Jason Fosler is a new middle school art teacher here at ASL. While teaching at his previous school – Carmel Middle School in California – he illustrated a book called The Drain Dragon.

The Drain Dragon is a story based on three young boys refusing to get out of their baths. In the book, their father tells them a tale about the Drain Dragon, a dragon living in the drains underneath the bath. The young boys, worried, decide to enter the drain in search of the Drain Dragon and find more than they anticipated. In the end, the dragon is quite different than what they had expected.

“[Dragons] were always my favorite thing to draw, and I’ve been drawing dragons since I was around six,” Mr. Fosler said. He is an enthusiast of Japanese comics and said he got inspiration for his character drawings from a comic called “Scott Pilgrim.”

Through Mr. Fosler’s drawings, it is clear that his imagination comes into play. The boys in the book are shown holding various weapons and wearing random items of safety gear to take on the Drain Dragon. One is dressed an archer with a skateboarding helmet, one as a gladiator wearing a football helmet, and one wields a wooden sword while wearing a viking helmet.  “In the story you don’t hear about the boys much, so I tried really hard in my pictures to give you a sense of what the characters are like in the drawings,” said Mr. Fosler.

Though the illustration was done by Mr. Fosler, he was not the only person who worked on the project. Mr. Dan Morgan, the writer of The Drain Dragon, had only been the Vice Principal at Carmel Middle School in California for a few months, but that didn’t stop them from being friends. This friendship eventually led to them working on the book together during 2014 and 2015.

That was Mr. Fosler’s first time illustrating a book, though it may not be the only one he may come across in the future, especially if The Drain Dragon becomes successful. “I’ve always dreamed of being an illustrator,” Mr. Fosler said.

He hopes that some of his own art students explore the possibility as well. “There are a lot of opportunities for illustrators,” Mr. Fosler said. “There’s a lot of demand for people with background in illustrations.”